The Olympics Are Meant To Inspire 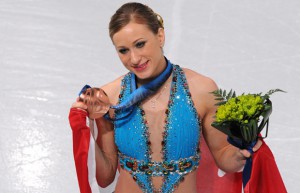 With the 2014 Olympic Games commencing in Sochi, we can again look forward to inspirational performances that demonstrate perseverance, overcome seemingly insurmountable obstacles and inspire us to what is possible. Here are a few of my favorites moments from past Olympic Games played in North America.

Kerri Strug – 1996 Atlanta: Despite injuring her ankle one her first vault attempt, sticks her landing on one leg on her second attempt, allowing the U.S. gymnastic team to defeat the rival Russians.

Jamaican Bobsled Team – 1988 Calgary: A country with no snow or winter sports program fields a competitive team and inspires a Disney movie.

Miracle on Ice – 1980 Lake Placid: The U.S. men’s hockey team make up of amateur and collegiate players defeat the best Soviet players on their way to the gold medal.

Nadia Comaneci – 1976 Montreal: The first female gymnast to be awarded a perfect 10 in an Olympic gymnastic event.

Do you have a favorite Olympic moment?