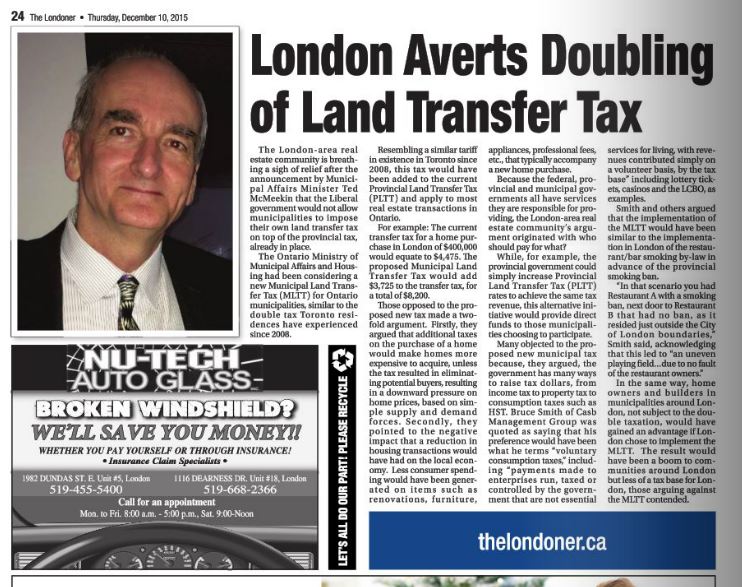 The London-area real estate community is breathing a sigh of relief after the announcement by Municipal Affairs Minister Ted McMeekin that the Liberal government would not allow municipalities to impose their own land transfer tax on top of the provincial tax, already in place.

The Ontario Ministry of Municipal Affairs and Housing had been considering a new Municipal Land Transfer Tax (MLTT) for Ontario municipalities, similar to the double tax Toronto residences have experienced since 2008.

Resembling a similar tariff in existence in Toronto since 2008, this tax would have been added to the current Provincial Land Transfer Tax (PLTT) and apply to most real estate transactions in Ontario.

Those opposed to the proposed new tax made a two-fold argument. Firstly, they argued that additional taxes on the purchase of a home would make homes more expensive to acquire, unless the tax resulted in eliminating potential buyers, resulting in a downward pressure on home prices, based on simple supply and demand forces. Secondly, they pointed to the negative impact that a reduction in housing transactions would have had on the local economy. Less consumer spending would have been generated on items such as renovations, furniture, appliances, professional fees, etc., that typically accompany a new home purchase.

Because the federal, provincial and municipal governments all have services they are responsible for providing, the London-area real estate community’s argument originated with who should pay for what?

While, for example, the provincial government could simply increase Provincial Land Transfer Tax (PLTT) rates to achieve the same tax revenue, this alternative initiative would provide direct funds to those municipalities choosing to participate.

Many objected to the proposed new municipal tax because, they argued, the government has many ways to raise tax dollars, from income tax to property tax to consumption taxes such as HST. Bruce Smith of Casb Management Group was quoted as saying that his preference would have been what he terms “voluntary consumption taxes,” including “payments made to enterprises run, taxed or controlled by the government that are not essential services for living, with revenues contributed simply on a volunteer basis, by the tax base” including lottery tickets, casinos and the LCBO, as examples.

“In that scenario you had Restaurant A with a smoking ban, next door to Restaurant B that had no ban, as it resided just outside the City of London boundaries,” Smith said, acknowledging that this led to “an uneven playing field…due to no fault of the restaurant owners.”

In the same way, home owners and builders in municipalities around London, not subject to the double taxation, would have gained an advantage if London chose to implement the MLTT. The result would have been a boom to communities around London but less of a tax base for London, those arguing against the MLTT contended.